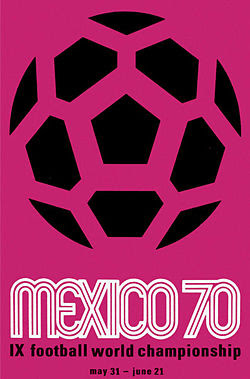 What has been your most memorable World Cup finals?

For many of us of a certain age, Mexico in 1970 remains the finest footballing tournament.
PHILIP BARKER explains why

It was 40 years ago and on the quality of the football alone, it is still reckoned by many to have been the greatest World Cup ever staged. Maybe it was because Mexico 1970 was the first World Cup tournament to be televised in colour that it lives on in the memory so vividly.

It also thrust ITV Sport in to the big time.

Led by John Bromley, who years later would become President of the SJA, ITV’s coverage was fresh, entertaining and tailored fair and square to a much wider audience than the BBC’s more serious approach. Brommers had in his mind’s eye a fictional couple, rather like Andy Capp and his missus, and planned his coverage with them in mind.

The masterplan was in an anonymous foolscap dossier compiled by a young member of the production team, Derek Brandon, who was later to become supremo of Channel 4’s American football coverage. His file was a statto’s dream, although occasionally it was off the mark. “Will Tostao and Pele be able to work together?” it asked and earnestly. “Many people… plus Italian TV’s computer, forecast that Russia will win the World Cup.”

For the most part though, the 100 or so pages had every conceivable nugget of infomation, on the squads, referees, shirt colours, even the hotels where the production team would be staying.

No accommodation was needed for Spain, Holland or Argentina. They did not qualify, the latter knocked out by Peru, who “deserve medals for that alone” according to the dossier, clearly mindful of Alf Ramsey’s “Animals” accusation after the infamous quarter-final against England four years before.

The dossier did worry about Peru’s keeper though. “Hands not too safe, weak with groundshots, tends to get nervous. Otherwise he’s quite good!”

If not everything that was written about the World Cup had great literary merit, ITV could at least claim that their theme music was written by Shakespeare. Not Will, but Joan and John. For those who need to know such things, it was called World at their Feet.

This 16-team tournament, with defending champions England drawn in a group with Romania, Czechoslovakia and favourites Brazil, were the first finals to allow substitutes, while referees were for the first time given red and yellow cards to overcome any language barrier. No red cards were produced during the tournament, although one or two probably should have been.

Morocco were the first African team to have an automatic qualifying place, while other newcomers to the finals were Israel, qualifiers from seven teams in a joint Asia and Oceania qualifying pool.

Back at BBC Television Centre, they drummed up some column inches with a competition to choose a new commentator. Eventually, Welshman Idwal Robling was selected ahead of luminaries such as Ian St John and Ed Stewart. Simon Cowell was in short trousers at the time, so Sir Alf was one of the judges. His team, still led by Bobby Moore, and including stalwarts of 1966 such as Geoff Hurst, Gordon Banks and Bobby Charlton, made an appearance on Top of the Pops to sing their chart-topping Back Home.

Down in Fleet Street, World Cup fever was spreading. The Sun had just been re-launched and produced that staple of every big tournament ever since, a wall chart complete with stickers.

The broadsheets had a new weapon – colour supplements. The Sunday Times magazine featured the wives of Alan Ball, Peter Osgood and Bobby Moore, but there was no WAG circus out in Mexico. In the Daily Express‘s guide , Norman Giller pre-empted “that tackle by Moore” when he wrote “ his worth is the way he brilliantly tidies up and intercepts.”

When Fabio Capello & Co step out in South Africa, they’ll be surrounded by a gaggle of media handlers and secure mixed zones. Ramsey’s men had no such protection in 1970 and didn’t just have to worry about the domestic press. The Mexican media whipped up a frenzy from Day One. “Thieves and Drunks” ran the headlines, the former a reference to skipper Moore, then under house arrest in Colombia on a fabricated charge of stealing a bracelet, the latter libelled striker Jeff Astle.

All England’s matches in Mexico were shown live on both BBC and ITV, David Coleman going head to head with Hugh Johns (pictured left). Coleman also presented from Mexico. One difficult day he let rip at a studio producer. The target of his wrath? Future BBC Head of Sport Jonathan

Meanwhile, the housewives and kids were tuning into the lighter touch on ITV. Their panel of experts included Jimmy Hill, Malcolm Allison, Paddy Crerand, Bob McNab and Derek Dougan, with Brian Moore presenting the coverage from London.

Moore’s former BBC Radio colleagues had their own problems. On one occasion, Maurice Edelston had to wrestle the microphone away from an over-exuberant Italian fan whilst trying to continue a commentary.

With the new slow motion technology, Rivelino’s breathtaking free-kick, utilising the light-weight Adidas Telstar ball, in the game against Czechoslovakia, helped quickly establish Brazil as the team everyone wanted to watch.

We had been warned. ITV’s dossier said Rivelino was “deadly with free kicks”.

The new angle from behind the goal also caught the sheer panic on the face of Czech keeper Ivo Viktor when Pele tried to lob him from the halfway line.

The showpiece matches were live on Sunday evening, under the broiling midday heat in Mexico, but perfect for television audiences in Europe. Brian Glanville memorably talked of the tournament being “prostituted to television”.

The most eagerly anticipated match was of course England v Brazil at the Jalisco Stadium in Guadalajara. A super Sunday before the term had been invented, a showdown at High Noon. As in the movie, it featured a man called Cooper, not Gary but Leeds United’s Terry, and soon he was up against Jairzinho.

“He’s left Cooper standing…” cried Coleman “Pele! What a save! Gordon Banks!” Immortality at a stroke, and all because it was seen live on television.

Despite such heroics, England lost by a single goal, Pele memorably swapping shirts with Moore and telling him they’d meet again in the final. But a week later, and up against the old enemies West Germany in the quarter-finals, and it all went wrong for England.

Two-nil up, the Germans staged a late fight back to force another spell of extra time and force a 3-2 win. Stand-in keeper Peter Bonetti was blamed for at least two of the goals. He’d been a late replacement for Banks, who had fallen ill with food poisoning, all rather suspicious as England had taken their own food – including a freezer-full of fish fingers – and there were mutterings of dark deeds.

Kenneth “They think it’s all over” Wolstenholme also suspected a plot, after the special edition of the Radio Times made no mention of him as the BBC’s commentator for the final. He feared the powers that be wanted to replace him with David Coleman, which they would do eventually. For now though, it was Wolstenholme at the mike for Brazil v Italy, who had beaten West Germany after extra-time in the semi-final.

Wolstenholme’s cup final commentary matched the magic of Brazil. “They take it in turns to give an exhibition,” he said. As Pele laid the ball gently into the path of Carlos Alberto to fire into the Italian net, “Oh, that was sheer delightful football.”

Would it be too much to hope that we will still be talking about South Africa 2010 with the same delight and enthusiasm 40 years from now?