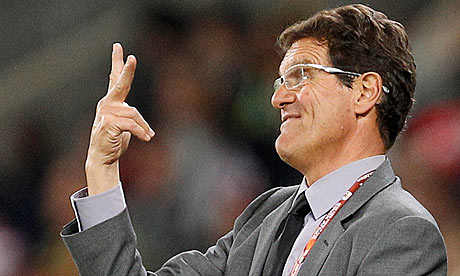 After the 0-0 draw against Algeria on Friday night, surely one of the worst performances by the national side in the past 40 years, the England coach has faced the biggest media firestorm of his tenure. But the big difference this time was that the criticism began with the broadcasters during the match.

Not for nothing has it been called “the impossible job”. England bosses from Sir Alf onwards have been sitting targets for Fleet Street, but when in the 1980s BBC’s Sportsnight did a feature on how the papers covered Bobby Robson (including The Sun handing out “Robson Out” badges to its readers), there was the broadcaster’s usual distance, as if to say that television and radio was above such vulgarity of the back pages.

For a long time, broadcasters – and, remember, paying rights-holders – were accused of having too cosy a relationship with those inside the game. More recently, though, 24-hour news coverage has seen broadcasters need to deliver greater depth. If a manager “loses it” during a post-match interview, expect to see re-runs of it throughout the following days.

England v Algeria was live on ITV (without any unscheduled ad breaks this time), and commentator Clive Tyldesley began optimistically. “Good evening from the Cape of Good Hope. Nuff said!” It was frustration from there on in.

“That was pretty awful,” presenter Adrian Chiles told the nation after the first 45 minutes, a statement which flies against all conventional TV wisdom, which insists that you always try to keep ’em watching by telling them something better is just around the corner. Maybe Chiles’ honesty was a result of his suspecting there was not anything better to come from England.

“Algeria look the better team at the moment,” Tyldesley announced midway through the second half. By the end, he had this damning assessment of England. “Not nearly good enough, desperate doubts about their calibre and credentials. It could be worse, but could the display have been worse?”

Interviewer Gabriel Clarke asked Fabio Capello, “Would you agree that that was not good enough?” The man who had been described as a “Winner with a capital W” when he took the job as England manager was at a loss to explain what had just taken place.

Over on the BBC, radio commentators Mike Ingham and Alan Green were unsparing in their criticism. “England have got exactly what they deserved,” Green said at the final whistle.

Graham Taylor, the former England manager, told the BBC’s listeners, “I honestly do feel there is something wrong in the camp. When you’re announcing your team two hours before kick-off, what sort of preparatory work have you been doing for the game if they don’t know what the team is?”

Things which were seen as virtues when England were sweeping all before them in qualification are now said to be the reasons England have faltered, though Taylor seemed to have forgotten that at the 1992 European championships, he had announced his own England team just an hour before kick-off.

Given Taylor’s abject record when in charge of England – the only manager to fail to qualify England for the World Cup finals in the past 30 years – his criticisms are arguably among the most fascinating.

When, 16 years ago, an apparently

still shell-shocked Taylor was interviewed by Greg Dyke for a documentary called The Impossible Job, what was striking was the former England manager’s strong feelings of betrayal and suggestions of lack of patriotism among the press corps who had travelled with him and his squad. How dare they, he seemed to suggest, question his side’s tactics and his selections of the likes of Andy Sinton, Keith Curle and Carlton Palmer.

Taylor was the most vilified England manager of them all. Long before the Turnips headline and that infamous “I do not like that” Channel 4 documentary, Martin Tyler called an England performance in Spain “dismal” in a post-match interview, much to Taylor’s annoyance. It was the start of more robust criticism by the broadcast media which reached its height in Cape Town on Friday.

The “analysts” in the ITV studio with Chiles, however, did not quite seem to know what to make of Wayne Rooney’s “outburst” – “It’s nice to see yer home fans booing ya” – as he left the field, but what with the intruder in the England dressing room (scooped up in classic tabloid style by the Sunday Mirror, with the added digital twist of the video of the interview), it gave the newspapers a strong line to run with over the weekend.

“At war with their own supporters, it is seriously questionable whether the players will have the stomach for another game,” Matt Dickinson had written in The Times under the headline, “Rooney in a rage, his team in the stew”.

Patrick Collins in the Mail on Sunday was as unimpressed with Rooney’s conduct as with his performance. “It was a bovine attempt at sarcasm for what he meant was those people who have travelled far and paid a daunting

price, how dare they demonstrate their disgust?”

In the cold light of Saturday morning came the Rooney apology, of the sort which seems to accompany every errant public utterance. “Last night, on reflection, I said things in the heat of the moment that came out of frustration of both our performance and the result.”

In reporting Rooney’s apology, ITV News called it England’s worst performance for years (their producers must have very short memories).

“Alarmingly lacking in belief and energy, Fabio Capello’s side continue to splutter whether at altitude or now at sea level,” observed Henry Winter in the Telegraph. ”After a second successive point, it’s back to the drawing board for Capello.”

“No excuses, this is as bad as it gets,” was the verdict of Shaun Custis in The Sun, prompting the thought that Sky had missed a trick not to gather him and Winter around a Cape Town breakfast table with Brian Woolnough to continue their regular review of the weekend football stories.

Because by Sunday, the focus had shifted to reputed rifts in the England camp, despite the straight bat played by the FA’s media chief Adrian Bevington when he pitched up on Garry Richardson’s Sportsweek programme on 5Live.

“I’m not aware of there being any specific problem,” Bevington said, something confirmed in an assured televised press conference performance given an hour later by John Terry, although the choice of Terry to front up, and not captain Steven Gerrard, only raised more questions.

Bevington had admitted, “The performance wasn’t anywhere near the level that we would have liked. When the results are not at the level you would like people, look for certain angles. We read and hear stories of disharmony or unhappiness, we’ve seen this many times over the years.”

In one respect, the BBC Sport planners have played a blinder, allowing ITV to show England’s first two matches live, and now holding the ace card of the decisive showdown against Slovenia.

The nation waits for Wednesday night. And Thursday morning’s newspapers.

What do you think has been the England football team’s worst performance? Click here for more