For more than 20 years, David Ashforth entertained lovers of the Turf with his unique views on horseracing. 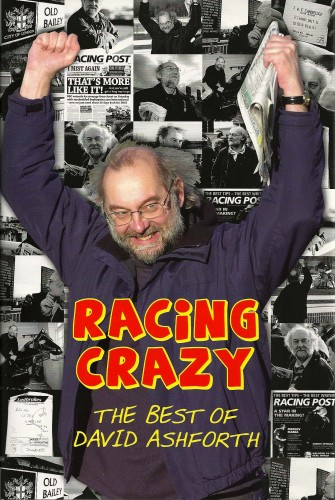 First in The Sporting Life, later in the Racing Post, Ashforth, who retired from full-time reporting at the end of 2010 after a career that twice saw him voted Journalist of the Year at the annual Derby Awards, producing a column that both entertained and informed.

The pieces were wide ranging: from colourful characters and his own experiences, tales of both the living and the dead, things he discovered through trawling through the newspapers’ archives – there is a wonderful piece on the racing gangs of the inter-war years – the joys of big race days, and the pleasures of small ones, Ashforth caught both the comic and the informative.

Now Racing Post Books has gathered together the best of his work – “with the boring bits taken out” – and published them as Racing Crazy: The Best of David Ashforth.

In his introduction, Ashforth explains how it all started with a newspaper misspelling his name in his byline. “In the beginning was the word, and the word was ‘Ashworth’. The Sporting Life, August 10, 1988: ‘David Ashworth takes a look at some equine enigmas and eccentrics.’ Ashworth, Ashford, Ashcroft – it’s always been like that.

“I joined The Sporting Life full time, and in 1992, began a regular column. Shortly afterwards, I received a postcard from a reader. It featured a gorilla with the gorilla’s head replaced by mine. The caption read: ‘Some readers think David Ashworth should keep his fucking mouth shut.’ When I showed it to some friends, they thought it was fair comment and not a bad likeness.”

After two decades as a full-timer, Ashforth has some valuable advice for anyone starting out in the business. When he went to Louisville to cover the Kentucky Derby, he was tapping away on his laptop in the pressroom when he tipped his carton of coffee over the keyboard.

“So my advice to aspiring young journalists is always put your drink behind your computer. And don’t drink too much while you’re writing. Sometimes I used to work in the evening in company with a bottle of wine. The resulting articles were wonderfully amusing. Unfortunately, on reading them again the next morning, it was necessary to put them straight into the waste-paper bin with the rest of the rubbish.”

The articles that comprise Racing Crazy easily survived the waste-paper basket. They are draw from those that appeared in The Sporting Life from 1988 to 1998, and in the Racing Post from 1998 to 2011.

Ashforth and his editors have selected articles for the book from his more amusing catalogue. “Although I’ve written many serious articles about the racing industry, they do not appear here because it would be nice if readers survived beyond the first paragraph.”

Racing Crazy had me smiling, and occasionally chuckling, from first page to last, particularly when Ashworth, sorry Ashforth, gets reflective. Such as the first item on his list of what he likes about the Cheltenham Festival:

“It means another year’s gone by, and I’m still alive. Yippee! From Arkle to Kauto Star, without a coronary. It must be awful to survive a winter of Southwell, only to die just before they set off for the Supreme Novices’ Hurdle. It was sad when actress Dame Thora Hird died, aged 91, but her timing was as impeccable as it had been in those wonderful Alan Bennett monologue Talking Heads. She died on March 15, 2003, two days after Best Mate won his second Gold Cup; March 15, not March 10. It makes all the difference. Worth bearing in mind of you’re not feeling well.”

I’ll leave you with his observation that, until 1955, divorcees were not allowed into the Royal Enclosure at Royal Ascot, a rule that just had to be lifted because, according to Ashforth: “It threatened to leave the Queen with no-one to talk to.”